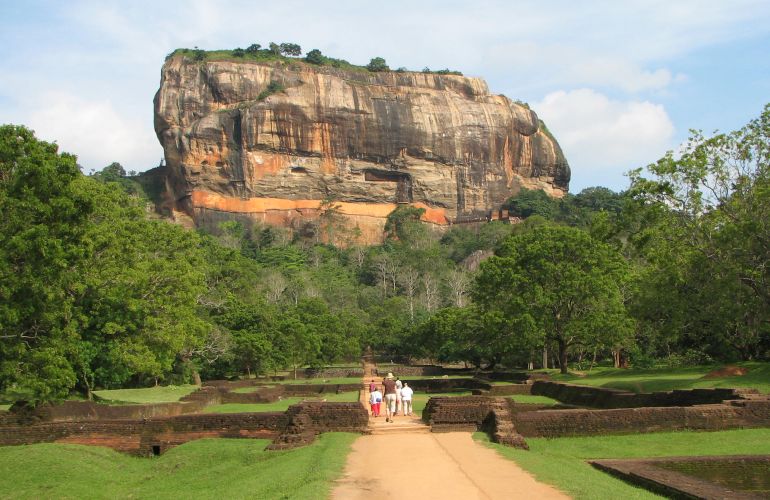 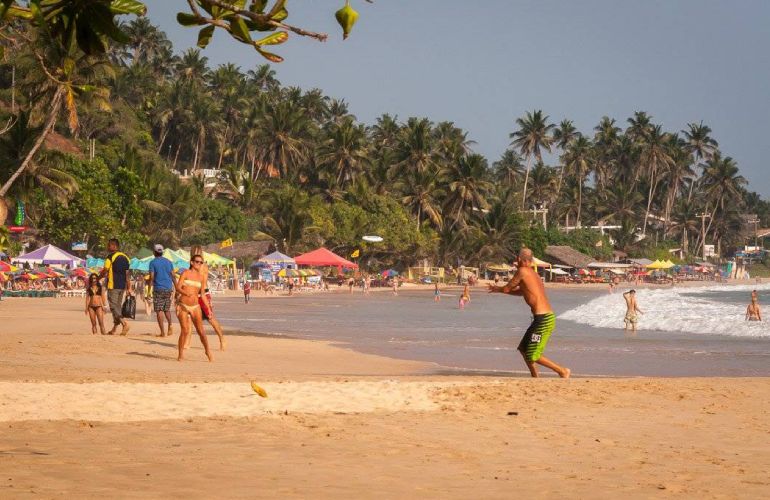 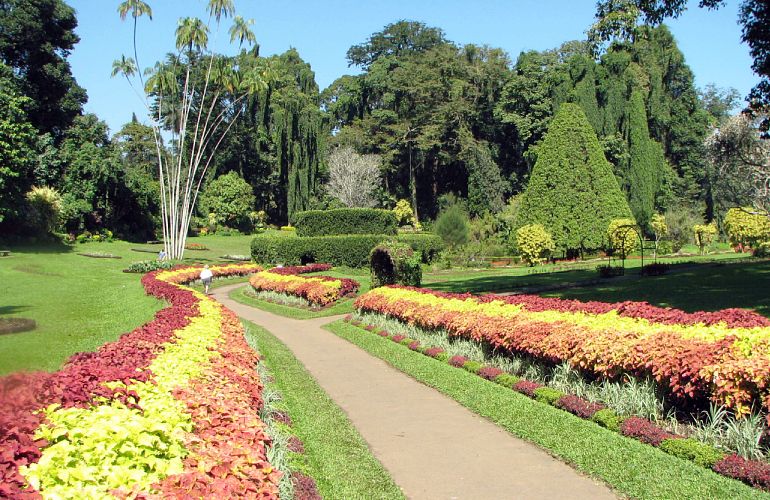 This 14 days tour of Sri Lanka and Maldives is perfect for tourists love to experience little bit of everthing. I mean history, cultural, walking and climbing, village tour, adventure and water sports in SriLanka and Maldives.

Welcome/Assistance at the Bandaranaike International Airport and drive to Negombo.

Negombo – a famous fishing village North of Colombo, with a Dutch built Canal. The canal itself is a hive of activitiy with fishermen traveling up and down in their gaily-painted boats. On the shores of the canal you will find many species of birds including spectacular Kingfishers.

Catamaran trips in the sea and boat trips in canal can be organized from November to April, diving facilities are available in this quaint village. The streets on either side of the hotels are dotted with Souvenir shops, Restaurants etc.

En-route visit Pinnawala Elephant Orphanage – an orphanage started in 1975 to house the abandoned and wounded elephants, Dambull Cave Temple – a vast isolated Rock Temple dating to the First Century B.C. The caves of Dambulla sheltered King Walagamba during his 14 years of exile from Anuradhapura. When he regained the throne, he built the most magnificent of Rock Temples to be found in the Island, Sigiriya – Lion Rock – a UNESCO World Heritage Site, and the 5th Century Fortress in the Sky which is perhaps the most fantastic single wonder of the Island,

Minneriya National Park – this national park with 8889 hectares in extent is famous for its large population of elephants in herds of 100 to 150 roaming in the jungle and seen in the catchment area of the lake, Hirivaduna – Trekking through a local village – an adventure that gets every nature lover excited. Ride a Bullock cart which is Sri Lanka’s oldest form of transportation on an unpaved trail. Then set off on a nature walk through a scrub jungle.

Lankatilake, Tivanka and Thuparama are the most beautiful and largest Image House and Tivanka as he best examples of frescoes of the Polonnaruwa period. Rankoth Vehera and Kirivehera are well preserved large stupas, and Gal Vihare – a rock shrine, has four Buddha statues, two seated, one standing and one reclining and Parakrama Bahu statue are examples of Sinhalese stone carver. The Vata-da-ge is a unique creation of the Sri Lankan Artists.

The medival capital, Polonnaruwa was fortified with inner & outer moats and inner and outer walls. The Parakrama Samudra is one the western side of the city. The Royal Palace, Audience Hall and other buildings in the inner city were enclosed by another tall wall.

Kandy – the hill capital is another UNESCO World Heritage Site, was the last stronghold of the Sinhalese Kings during the Portuguese, Dutch and British rude and finally ceded to the British in 1815 after an agreement.

To the buddhist of SriLanka and the world, Kandy is one of the most sacred sites as it is the home of the “Dalada Maligawa” – Temple of the Sacred Tooth Relic of Lord Buddha.

When King Wimaladharmasuriya – I (1592-1604 A.D.) became King in Kandy, he searched for the Tooth Relic and the bowl Relic of the Buddha and found that it was kept at the Delgomuwa Buddhist Temple at kuruwita, for more than 44 years, hidden in a grinding stone. The king had gone there personally and brought the Sacred Tooth Relic to Kandy in a procession acoompanied by the king.

147 acres in extent; Started in 1374 as a pleasure garden of the Kings of Gampola and Kandy. There are more than 5,000 species of trees, plants and creepers. Some rare and endemic as well as flora from the tropical world are found in the gardens. Spice Garden and Orchid House are popular with tourists.

Kandyan dance takes its name from Kandy, the last royal capital of SriLanka, which is situated about 120 km from the modern capital at Colombo. This genre is today considered the classical dance of Sri Lanka.

Tea was first planted in Sri Lanka in 1824 at the Botanical Gardens at Peradeniya, when a few plants were brought fom China. More were intruduced from Assam in 1839.

According to the Indian Elic Ramayana, the legends, the area where Sita, Queen of King Rama of Ayodhya in India, was abducted by Ravana – the King of Sri Lanka, was kept in hiding and the area she roamed is in the hill country of Sri Lanka.

In Nuwara Eliya is the Sita Amman Kovil – a quaint little Kovil, with the statues of Rama, Sita, Hanuman, Lakshman and Sugriva.

This is supposed to be the only Kovil in the entire world dedicated to Sita. The stream by the side of the Temple is a famous spot where she went for bathing.

The Hakgala Gardens may be the Ashok Vanaya of Ramayana, where Rhododendrons identified as Ashok Flowers in the epic, are found in bloom throughout the year.

Four miles south east of Nuwara Eliya is another prominent peak, Hakgala. At its food lie the Hakgala Botanical Gardens, and above it is the Hakgala Strict Nature Reserve.

The Little England of Sri Lanka, is set against beautiful backdrops of Mountains, Valleys Waterfalls and Tea Plantations. It is supposed to be one of the coolest places in the Island, but it is really just like an England spring day, although the tenperature does drop at night. All around Nuwara Eliya you will see evidence of the British influence, houses like country cottages or Queen Ann style mansions.

Kanyakumari – formerly known as Cape Comorin, considered as the southernmost point of main-land India, located at the confluence of the Indian Ocean, Arabian Sea and Bay of Bengal.

Whale watching Mirissa has been most popular attraction among the tourists who visit Sri Lanka since 2009 and still we are operating whale watching tours based in Mirissa harbour. Mirissa is the closest point to where blue whales are inhabited because it has appropriate environment conditinos to live these giants.

Weligama – a town on the south coast of Sri Lanka, located in Matara District, Southern Province, Sri Lanka, governed by an urban council. The name Weligama means “sandy village”, which refers to the area’s sandy sweep bay. It is approximately 144 km (89 miles) south of Colombo and is situated at an elevation of 9 mtr (30ft) above the sea level.

Start cruising through the Punnamada Lake, Vembanad Lake – enjoy panoramic views and the glimpses of the life along the banks. High points of the cruise are the visit to the 400 year old church and the viewing of Kerala Race Boat….”

Morning enjoy boat cruise which takes you on the Bentota River and under the Bentota Bridge. You are taken through mangroves which surround you with astounding beauty. Experience nature first hand as your guide helps you to identify unique plants and animals.

Transfer to airport to connect flight for Maldives.

Airport assistance and connect speadboat to your resort. Check-in formalities and proceed to your room. Rest of the day free and enjoy scenic beauty of Maldives.

Full day free at laisure. Walk around on the white sandy beaches of Maldives or free to take any activities like water sports and on board cruise etc.

Full day free to relax or enjoy adventure activities of your choice.

You may also choose to visit Male – capital city of Maldives. Male is an amazing mix of New and old city.

Another free day to relax or you can opt for a half day island hopping tour. You can laze around on the popular beaches, have a lot at the lush scenery and prosperous vegetation, take a leisure walk, soad in the serenity and more.