The Somnath temple is also known as Deo Patan, located in Veraval, Saurastra on the western coast of Gujarat, India. It is believed to be the first among the 12 jyotirling shrines of Lord Shiva – the destroyer. This is an important pilgrimage and tourist destination of Gujarat.

Reconstructed several times in the past due to repeated destruction by several Muslim invaders and rulers. The present temple (mandir) was constructed in the Chalukya style of Hindu temple architecture and was completed in May 1951. The reconstruction was started by Home Minister Vallabhbhai Patel (known as Sardar Patel), completed after his death.

The Somnath Temple is one of the Top 50 Famous Temples in India.

There are several poojas take place at Somnath Temple, as below:

Some of the Festivals celebrated at Somnath Temple ……

The Shivalinga in Somnath, according to tradition, is one of the 12 Jyotirlings in India, where Lord Shiva is believed to have appeared as a fiery column of light. The Jyotirlingas are taken as the supreme, undivided reality out of which Shiva partly appears.

Each jyotirling sites take the name of a different manifestation of Shiva. At all 12 jyotirlinga sites, the primary image is a lingam representing the beginning-less and endless Sambha (pillar), symbolising the infinite nature of Lord Shiva.

In addition to the one at Somnath, the others are…..

The Somnath site has been a pilgrimage site from ancient times on account of being a triveni sangam (the confluence of three rivers: Kapila, Hiran and the mythical Saraswati).

The Moon God ‘Soma’, is believed to have lost his lustre due to a curse, and he bathed in the Saraswati River at this site to regain it. The result was the waxing and waning of the moon, no doubt an allusion to the waxing and waning of the tides at this seashore location. The name of the town Prabhas (meaning lustre), as well as the alternative names Someshvar and Somnath (‘the lord of the moon’ or ‘The Moon God’) arie from this tradition.

This first Shiva Temple of Somnath is believed to have been built at some unknown time in the past. The second Somnath temple is said to have been built at the same site by the “Yadava kings” of Vallabhi around 649 CE. Al-Junayd, the Arab Governor of Sindh (in 725 CE) is said to have destroyed this second temple as part of his invasions of Gujarat and Rajasthan. However there is no record in history, of attach on Somnath by Al-Junayd.

The Gurjara-Pratihara king Nagabhata II is said to have reconstructed the Third temple in 815 CE, a large structure of red sandstone. King Nagabhata II visited Firths in Saurastra including Someshvara (the Lord of Moon), which may or may not be a reference to a Shiva Temple because the town was known by that name, itself. King Mularaja (the Chaulukya) possibly built the first temple at the site sometime before 997 CE, even though some historians say that he may have renovated a smaller earlier temple.

A Turkic Muslim ruler Mahmud of Ghazi raided Gujarat in 1024, during the reign of Bhima I, plundering the Somanath Temple and breaking its Jyotirlinga.

Alauddin Khalji’s army, led by Ulugh Khan (during its 1299 invasion of Gujarat), defeated Karna – the Vaghela king, and sacked the Somnath temple. Legends in the later texts state that the Jalore ruler Kanhadadeva recovered the Somnath Idol later and freed the Hindu Prisoners after an attach on the Delhi Army near Jalore.

The Somnath temple was rebuilt by Mahipala I, the Chudasama king of Saurashtra in 1308 and the Shiva lingam was installed by his son Khengara sometime between 1331 and 1351.

The Somnath temple was destroyed of the 3rd time by Zafar Khan, the last governor of Gujarat under the Delhi Sultanate, in 1395.

The Mughal emperor Aurangzeb ordered to destroy the Somnath temple, one of many, by 1665.

In 1702, he ordered that if any Hindus revived worship in Somnath temple, the temple would be demolished completely.

The Maratha expansion in North India revived many dilapidated temples. The Somnath temple was rebuilt by the Ahilyabai Holkar of Indore.

Veraval was part of the Junagadh State before independence, whose ruler had acceded to Pakistan during partition in 1947. This Junagadh State was made a part of India and Deputy Prime Minister Mr patel came to Junagadh to direct the stabilisation of the state. At the same time Sardar Pater ordered the reconstruction of the Somnath temple.

However, soon Sardar Patel died and the task of reconstruction of the Somnath temple continued under Munshi – who was the Minister for Food and Civil Supplies, Government of India. The ruins of mosque, present at the site, were pulled down in October 1950 and was shifted few kilometres away.

Dr Rajendra Prasad – the first President of Indipendent India, was invited by K M Munshi to perform the installation ceremony for the Somnath temple in May 1951. The President Dr Rajendra Prasad said “It is my view that the reconstruction of the Somnath temple will be complete on that day when not only a magnificent edifice will arise on this foundation, but the mansion of India’s prosperity will be really that prosperity of which the ancient temple of Somnath was a symbol.” He further added: “The Somnath temple signifies that the power of reconstruction is always greater than the power of destruction.”

The present Somnath temple is built in the Chalukya style or “Kailash Mahameru Prasad” style and reflects the skill of the Sompura Salats, one of Gujarat’s master masons. The main spire is 15 metres high and it has an 8.2 metre tall flag pole at the top.

The Somnath Jyotirlnga temple is situated at such a place that there s no land in a straight line between Somnath seashore until Antarctica, such an inscription in Sanskrit is found on the Banastambha (Sanskrit: बाणस्तम्भ, lit. arrow pillar) erected on the sea protection wall.

Before India’s independence, Veraval was part of the Junagadh State, whose ruler had acceded to Pakistan in 1947. After India refused to accept his decision, the Junagadh state was made a part of independent India and Deputy Prime Minister Sardar Patel came to Junagadh to direct the stabilisation of the state by the Indian Army and at the same time he ordered the reconstruction of Somnath Jyotirlinga Temple.

Other famous temples near Somnath Temple are : 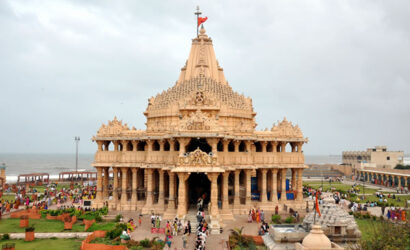