Sri Amarnath Shrine of Lord Shiva counts as one of the 18 Maha Shakti Peethas. As per ancient hindu mythology, Lord Shiva unveiled His secret of Immortality to Devi Parvati here. He left the five elements of Nature – Air, Water, Earth, Fire and Sky before entering the cave to maintain the secrecy. The place where Lord Shiva left these elements of Nature behind is popular by the name Panchtarni.

The pilgrims witness the holy confluence of Amravati and Panjtarni rivers on their visit, regardless of the difficulty involved in the Amarnath Yatra Package.

An interesting story behind the discovery of the Holy Shrine – centuries ago Maa Parvati asked Lord Shiva why n when he started wearing the beads of heads (Nar Mund Mala), to which Bhole Shankar replied, ‘whenever you born I add one more heads to my bead’.

Parvati said, ‘I die again and again, but you are immortal, tell me secret reason behind this. ‘Bhole Shankar replied that for this you will have to listen to Amar Katha’ and Lord Shiva agreed to narrate the detailed story to Maa Parvati. Lord Shiva started to look for a lonely place where no living being could listen to the immortal secret and ultimately chose Amarnath Cave.

After leaving behind all these, Bhole Shankar entered he Holy Amarnath Cave along with Parvati Maa and took his Samadhi. To ensure that no living being is able to hear the Immortal Take (Amar Katha), he created Kalagni and ordered him to spread fire to eliminate every living thing in and around the Holy Cave. After this he started narrating the secret of immortality to Maa Parvati. But a pair of pigeons heard this story, hence became immortal. Even now, many pilgrims report seeing the pair of pigeons at the Holy Shrine and amaze as to how these birds servive in such a cold and high altitude area.

Sri Amarnathji is considered to be one of the major Hindu Dhams. The holy cave is the abode of Lord Shiva – the guardian of the absolute. The destroyer, Lord Shiva, is enshrined in the form of an ice-lingam in this cave. This lingam is formed naturally, and believed to wax and wane with the moon.

Existance of The Holy Cave has been mentioned in the Puranas but the re-discovery of this holy cave is of a shephered Buta Malik. And the story goes like this……

A saint gave Buta Malik a bag full of Coal. On reaching his home when he opened the bag, to his utter surprise the bag was full of gold coins. This overwhelmed him with joy. He ran to tank the Saint but the saint had disappeared. instead, he found the Holy Cave and the Ice Shiv Lingam there in. He announced this discovery to the Villagers. Than onwards this became a one of the most sacred Hindu Pilgrimage.

There is another story, the ancient epics narrates. The valley of Kashmir was under water and it was all a big lake. Kashyap Rishi drained the water through a number of rivers and rivulets. In those days Rishi Bhrigu came that way on a visit to The Himalayas. Bhrigu Rishi was the first to have Darshan of this Holy Cave. When people heard of the Lingam, Amarnath for them became Shiva’s abode and a centre of Hindu Pilgrimage.

Since then Lacs of devotees perform the pilgrimage through tough terrain and achieve eternal happiness. The trek to Amarnath, in the month of sharavan (July-August) has the devout flock to this incredible shrine, where the image of Shiva, in the for of Lingam, is formed naturally of an Ice Stalagmite, which is believed to wax and wane with the Moon’s cycle.

The trek route to Amarnath Cave is very difficult and steep. This makes it very hard for the devotees to reach the cave. Pilgrims visit the holy site during the 45 days season around the festival of Shravani Mela in July-August every year. The beginning of this annual pilgrimage, called the Amarnath Ji Yatra is marked by ‘Pratham Pujan’ to invoke the blessings of Sri Amarnathji. 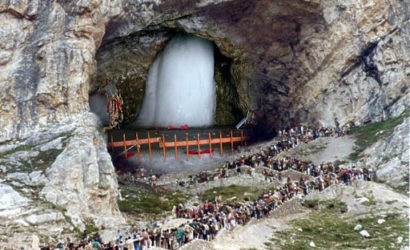